How Fast Does a Giraffe Run? Want to learn about a giraffe’s speed? How they drink? And just how tall are they? Learn all about these unique mammals here, and become a giraffe expert!

Just how fast is a giraffe?

Of all the land mammals – giraffes have the longest strides. This should come at no surprise as the legs of giraffes are 6 feet (1.8 meters) long!

So, exactly how fast can a giraffe run? They can reach a top speed of 38 miles an hour (60km/h) when running short distances. When covering long distances, giraffes can comfortably move at a pace of 10 miles (16km/h) an hour.

These majestic creatures don’t look like they are running – it almost seems that they are moving in slow motion. You realize the significance of a giraffe’s top speed when you try to keep up with their pace. This is when you realize 38 miles an hour is an incredible speed. How do giraffes run?

Have you ever seen a giraffe run? If not, you should check it out – it is quite entertaining to watch!

The way they move their legs is not common to other animals in the animal kingdom. When a giraffe runs – they first move both their left legs, then both their right legs.

Animals in the ungulate family, like horses, walk in the same manner. Left, left, right, right. The difference is that when they trot or gallop – the movement changes to left, right, left, right.

When a giraffe is running they keep the same stride pattern as when they are walking. They just move at a quicker pace. Most of their forward momentum comes from their back legs crossing on the outside of their front legs. Can giraffes swim as fast as they run?

Giraffes are able to swim but it is not their best talent. People think that because of the way they are formed – long necks and legs – giraffes cannot possibly swim. If you thought that – you are wrong. Giraffes can float but don’t expect them to be winning any backstroke competitions anytime soon.

Giraffes aren’t just known for their unique stride. There is much more to these beautiful creatures. Read and learn more about them below!

How tall is a giraffe?

When standing – a giraffe can reach heights of 4-5 meters – making it the tallest mammal in the world. The tallest giraffe to be measured was 5.8 meters in length. That is taller than a double-decker bus! With such height comes great weight. On average they weigh an impressive 1900kg. 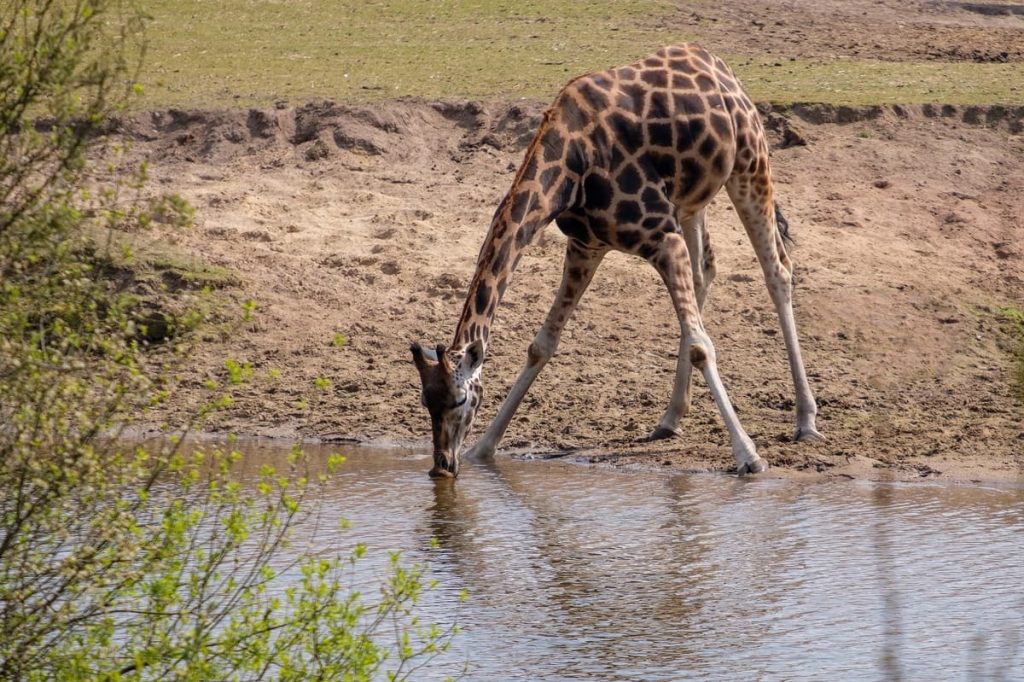 How do giraffes drink?

This is a challenge. Their necks are too short to reach the ground – who would have thought? They need to awkwardly part their front legs in order to drink water from ground-level. Luckily, giraffes don’t need as much water as humans do and only need to drink once every few days. They also consume water from all the plants they eat.

What do giraffes eat?

These gentle giants have a particular taste for acacia trees (especially since other animals can’t reach them) but also eat fresh leaves and twigs from treetops. Their height also benefits them during droughts. Giraffes can reach the tallest trees – which tend to have the deepest roots – meaning it can still access water even during dry times. This means that they always have food to eat.

Giraffes, however, are not strictly vegetarian. They also eat bones. They don’t kill other animals but due to their huge skeletons, they require a large amount of calcium and phosphorus. The best way for them to reach their quota is to chew the bones from carcasses. To keep up with their body’s demand in regards to food, giraffes spend 16 to 20 hours a day eating. One would think this activity would make them tired and require a lot of sleep. Surprisingly though, the opposite is true. Giraffes only need between 10 minutes and 2 hours of sleep in a 24-hour cycle!

Giraffes can nap while standing but like most animals, they prefer to sit down / lay to rest. This, however, places them in a vulnerable position. Often one member of the tower (herd) of giraffes keeps watch from any possible predators.

How long is a giraffe’s tongue?

Huge! The tongue of a giraffe can be 45 – 50 cm long. They are prehensile and blue-purple in color. Making them perfect for ripping off fresh leaves and twigs of the spikey acacia tree.

How big is a giraffe’s heart?

As they are unusually shaped, giraffes have difficulty getting enough blood to their heads. They compensate for this with their enormous hearts. Their hearts can weigh up to 25 pounds (11 kilograms) and measures at 2 feet (60 centimeters).

This results in blood pressure that equals to almost double the amount that of humans. To prevent blood from rushing too fast down the neck, the artery walls have extra elasticity in them. Also, the jugular veins in the neck partially tighten to regulate flow. Do giraffes have their own personal pattern?

In short, yes they do. The patterns of a giraffe are like human fingerprints, no two are identical. It is like a herd of sheep – spend enough time with them and you will be able to tell each animal apart. The same goes for giraffes.

How does a giraffe defend itself?

Don’t let their lanky long legs fool you! They are well-skilled in the form of self-defense. Even lions only dare attack them when in a large group – and even that doesn’t occur often. The legs of a giraffe are extremely powerful. Each ends in a hard, sharp 12-inch (30-centimeter) hoof. Their hoof and leg are so strong and can move in such a way that it can kill a lion – in some cases, it can even decapitate it. Not surprisingly, adult giraffes are often left unbothered by predators. Are giraffes in danger of becoming extinct?

According to the International Union for Conservation of Nature and Natural Resources (IUCN) – giraffes are at an endangered status. They face overhunting and habitat degradation. Trees are chopped down for various reasons – firewood, building materials, and grazing land for livestock. Also, due to their large nature, giraffes are poached for their meat.

Final thoughts on the grand Giraffe

It is no wonder that giraffes are on top of the list of many people’s favorite animals. Their elegant and unique stride, calm demeanor, and flamboyant eyelashes give them a sense of class and appeal.

Camp Kuzuma Review - Everything You Need to Know

Top 5 Madagascar Destinations & Things To Do While You’re There