What Sound Does A Gorilla Make?

Similar to humans, gorillas are social animals. They live in harems where one male adult lives with several female adults and their babies. Naturally, they need to communicate with each other.

All animals have a way of making themselves heard and gorillas are no different. They tend to get loud and dramatic, resorting to screaming, growling, roaring, or hooting, depending upon their mood. Angry gorillas make different sounds to happy gorillas. Sometimes though, the sounds are more subtle and accompanied by the use of gestures as a form of expression.

A basic understanding of the various different gorilla sounds will help you identify the mood of the animal on your next gorilla trek.

Why Do Gorillas Beat Their Chests?

The “chest beat” has been popularized by the Tarzan movies where the main protagonist stands on his two feet and uses clenched fists to beat his chest. While gorilla chest-beating is similar, the difference is that it happens with open hands.

The animal beats its chest as a show of dominance and strength to other gorillas – male as well as female. The action is sometimes preceded by hooting and biting off a leaf and followed by hitting the ground and tearing apart a sapling.

Sighting a gorilla beating its chest is probably the most exciting part of a gorilla trek.

Different Sounds Made by Gorillas 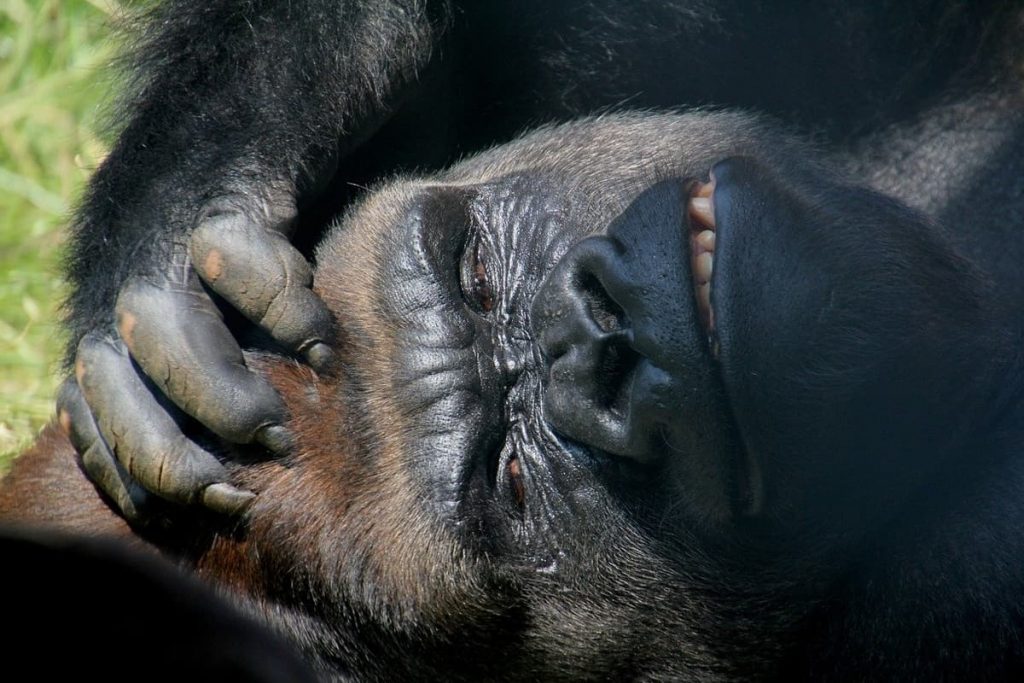 What would be your first response when you’re angry or scared? Gorillas scream when they feel endangered and the scream is usually accompanied by a charge. The main intention behind the reaction is to scare the source of danger away.

The scream is a loud ‘waaaah’ made by baring the teeth together and is extremely intimidating. Dian Fossey, a conservationist that has worked with mountain gorillas, says that when she gained the animals’ trust, she was able to get close to them without the alarming scream.

This relaxed behavior after learning to trust is not very different from ours. We also tend to let our guards down when we start trusting someone. The younger members in any group are usually the most cheerful and free from all worries. Their playfulness is evident from the chuckling sounds they make when having fun among themselves. They make gestures asking fellow members of the troop to join them and laugh with a ‘hahaha, ha ha’ sound.

While the younger ones love to engage in playful activities, the older members sometimes let loose and join in on the chuckling. Belching is a non-threatening and calming sound made by gorillas to convey that they are okay with the presence of visitors in their surroundings. It is also known as a contact call. Ian Redmond, a tropical field biologist and conservationist, has frequently used the term ‘gorilla etiquette’ to describe this sound.

Trekking guides imitate the belching sound during gorilla treks. The idea is to stay low and not tower over them, fold their arms and look away, glancing at them from the corner of the eye to indicate co-operation.

This behavior is similar to announcing your arrival and assuring them that you mean no harm and are not aggressive. The main intention is to take the element of surprise away so as to not alarm them. Gorillas burp when they are happy. The burping is generally followed by singing and is associated with their tummies being full. They make a sound similar to that of a high-pitched dog while eating as they are extremely happy and content.

Singing is another happy sound that indicates that the gorillas are at ease. They can distinguish between each other’s voices and re-assure those around them of their contentment and satisfaction. Everyone’s response to danger is different. Gorillas resort to pin-drop silence and use gestures to communicate with each other and decide on a plan of action.

They look in the direction of the suspected danger and try to figure out who or what is approaching. The sudden silence is an indication to become cautious and watch out.

Gorillas can look at each other, identify the look of worry, and act accordingly. They wait behind the bushes and observe the source of danger. Looking for the perfect opportunity to jump out and roar aggressively, they scare the threat away.

Gorillas like to mark their territory while eating. In addition to the plant that they are chewing on, they keep an eye on the plant they intend to eat next. If someone else gets to the next plant before them, they produce an ‘uh, uh, uh’ sound which means ‘back-off, that’s mine’.

The ‘uh, uh, uh’ is often called a pig grunt because of the way it sounds. The warning sound is distinct from all other sounds made by a gorilla and is difficult to miss. Two females sharing the bond of motherhood can communicate in mysterious ways. Two nursing gorilla females are affectionate with one another and need no sounds to show their mutual understanding. They use the sensation of touch to converse.

For example, one female may also touch the other to say hi and then start moving away. The other one may try to stop the first one, who in turn invites the other one to join her wherever she is going. They are able to talk to each other silently and effectively.

A Summary of Gorilla Communication

Just like humankind does not have one language common to all, gorillas in different troops communicate in different tongues. Their gestures and basic sounds are common across the species. There are variations in the tone and pitch depending on the region, just as there are different dialects in our languages.

You can hear gorillas roar when they are scared. They scream when they are angry. They make it known when they are mating, eating and playing. A mean gorilla asks the others to back-off from its food. Gorilla behavior is not very different from ours. They can understand and interpret language with the same ease and it constitutes an integral part of their survival.