Wildebeest Migration- Everything you Need to Know

When we think of Wildebeest migration, we think of the seventh Natural Wonder of the World. Nowhere in the world does such an incredible movement of hooves happen. And the fact that it’s a reasonably predictable wonder that we can go out and witness, makes it all the better.

We will take a look at where you should be if you want to witness this extraordinary trek, and what you’ll see.

Newborn calves are able to walk minutes after their birth. It might seem like a rickety gamble as they stand on their own four feet, but for the most part, they manage it. If they are not quick to their feet, they will most likely face the hardships of the natural order.

The survival of the fittest is certainly a part of life in the Tanzanian Migration, as it is in the rest of the natural world. However, if they can handle this hurdle, they will have a chance at one of the greatest migrations on earth.

Why do the Wildebeest Migrate?

The Wildebeest, as herbivores that live in precarious environments often must migrate in order to find fresh grazing, as well as more or (as is now thought) better quality water.

After all, these herds are huge, and the animal itself is no runt of the antelope litter (actually, they are the biggest). They can flatten a grassland in a day without breaking a sweat.

Because they go through their food sources at such a pace, they are constantly moving. Therefore, the Great Migration takes place throughout the year. Depending on what you’re looking to see, you can join the herds at any month.

When do the Wildebeest Migrate? The Wildebeest, along with approximately 200 000 zebra, and a scattering of other antelope, are almost always on the move. As previously mentioned, all months of the year see these majestic grazers moving from grassland to grassland.

While there’s no way to know exactly when and where they will be from month to month, we can give you a pretty accurate idea, so that you can decide where to head out on safari.

The migrations begin anew at the beginning of each new year (if that’s the starting point in our perspectives).

Best time to view the Great Migration of Tanzania Our favorite month for the viewing of the Great Migration is September. At this point, the extremely dramatic crossing of the Mara River is occurring. This is not the first river that the Wildebeest cross, but it is certainly the most exciting.

The crocodiles lie in wait, knowing that their prey will inevitably come. The wildebeest have no course of action other than this, and so they must cross the river.

Therefore, you are sure to see grand struggles, sad losses, and victorious escapes.

The Type of Migration Wildebeest Make

The Great Migration is a huge looped trek through Tanzania and Kenya. They instinctively follow a clockwise movement, following the rains and seeking the lushest grasses.

The five hundred kilometre (310 miles) journey is fraught with both predatory and circumstantial dangers. Crocodiles, cheetahs and lions take advantage of the huge amounts of animals flowing through their territory.

After the calving period has taken place, the wildebeast are particularly vulnerable to attack. But we can take comfort in the fact that, as all untouched nature is, it’s part of the circle of life. The loss of some of the wildebeest will mean full cubs and thriving prides, amongst others.

The Dangers of the Trek 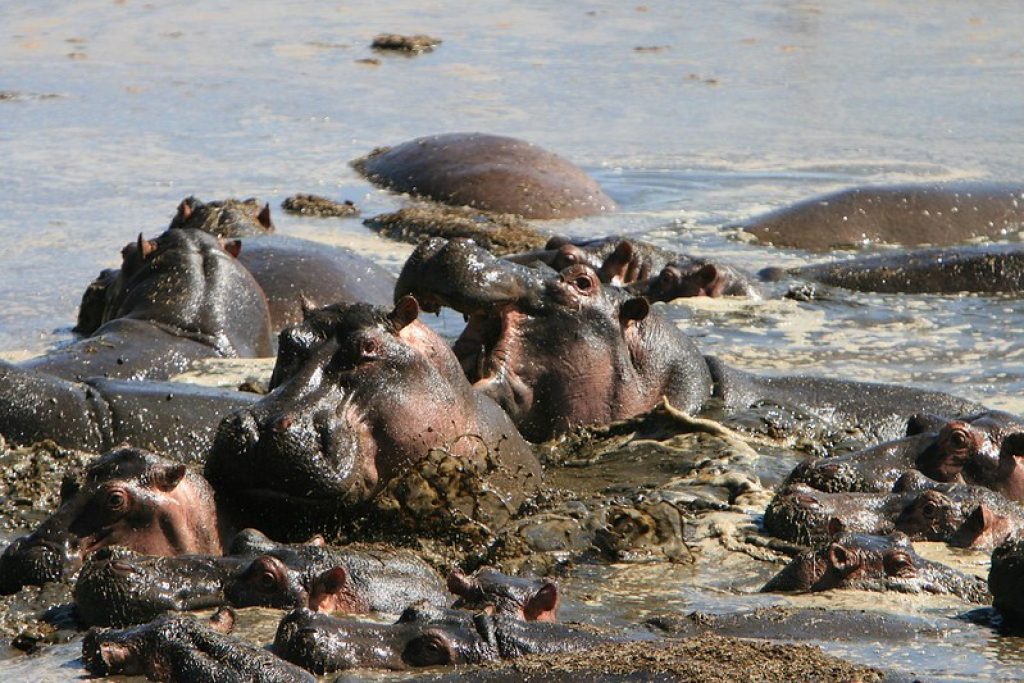 So we know that the classic predatory dangers pose a threat to the huge numbers of wildebeest migrating. However, they are certainly not the worst that must be faced.

Hippos are incredibly dangerous foes to have. Fast, deftly strong, and without a particular motive (they are herbivores), hippos are possibly one of the worse mid-river dangers to come across.

Another enemy to be wary of, is the natural progression of life and death within the herd. New mothers are not used to their offspring’s needs, and therefore often do not want to let them feed. They associate their young with pain, and do not want them anywhere near them.

So, although calves can run as fast as their mothers within 2 days of being born, sometimes this is not enough.

Last Words on The Great Migration Across Tanzania and Kenya

This is an incredible phenomenon to witness. Even just knowing that it is happening, right now, is a moving thought. Safarinear can help you find the right safari, depending on what you want to see of the migration.

And we know that, while there is a lot of death and struggle on this eternal loop through the grasslands, life prevails.